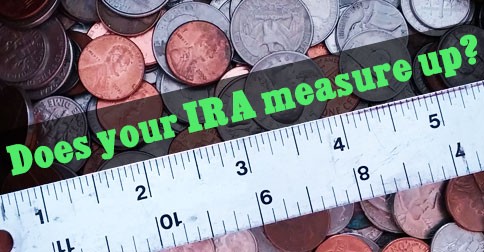 Fair Market Values of IRAs – How Does Yours Measure Up?

Fair market value is the value of all investments within an individual retirement arrangement (IRA) at the end of the calendar year. This is reported to the IRS on Form 5498 by the IRA administrator every year.

The largest federal statistical organization, called the Statistics of Income (SOI) released information on 2012 tax data from IRS reporting, including a section on IRA fair market values (FMV). The report states that the FMV for retirement plans has been rebounding since the 2008 Great Recession, when so many investors saw the values of their investments plunge. The upward trend was cited with statistics from year-end 2008 to year-end 2011. It’s been quite a seesaw of values since 2005, when FMVs of all types of IRAs was $3.4 trillion.

The study further breaks down FMVs by type of IRA. Traditional IRAs surpassed Roth IRAs by about 10 times, with investments values at $4.6 trillion vs. $403 billion at the end of 2012. However, the data also revealed that Roth IRAs are gaining in popularity and received more in regular contributions that year than did their Traditional counterparts. Those 2012 contribution amounts were quite disparate: $17.7 billion as opposed to $14.1 billion.

Here’s another wide discrepancy between fair market values in 2012 for the retirement plans used by business owners and the self-employed: the year-end FMV for SEP IRAs was $272 billion, which dwarfed the $72 billion for SIMPLE IRAs.

In our next blog post, we’ll look at how the FMV numbers stack up when parsed by adjusted gross income and contribution types.

Have a question about contribution limits or types of investments you can include in your self-directed IRA? The knowledgeable staff at Next Generation Trust Services can answer your questions and direct you to the resources to ensure you are investing safely within IRS guidelines.

SECRETS ABOUT SELF-DIRECTED INVESTMENTS YOUR BROKER DOESN’T WANT YOU TO KNOW: Get Your Whitepaper Here

Contact us at Info@NextGenerationTrust.com or (888) 857-8058 to discuss your self-directed retirement plan needs.