So you’re nearing retirement—or you’re still in the middle of your work life and saving regularly for your future. Are you going to be ready financially when you retire? Have you been investing in ways that will give you the right returns on those investments?

A new BlackRock survey on attitudes about money and financial goals found that:

Chuck J. Rylant, MBA writes about personal finance and authored “How to be Rich: The Couple’s Guide to a Rich Life Without Worrying About Money.” He says that when it comes to saving for retirement, “Many do not invest enough because they are overwhelmed.” He suggests that individuals “begin with an honest assessment of how much you will need in retirement.” Then, as with starting any new habit (such as saving) Rylant recommends beginning with easy, achievable victories.

“To use a fitness example, if 100 pushups feels overwhelming, do one pushup per day. When one is easy, do two. Eventually 100 will seem easy. Money is no different.”

Expectations vs. reality for retirement income

The gap between expectations of future annual retirement income and present reality shows a yawning gap that reflects this disconnect. The survey respondents who are baby boomers (ages 55 to 64) said they expected to have about $45,000 in annual income when they retire; but the real figure based on what they had saved would only provide approximately $9,129 annually—a potential $36,371 gap!

This trend was even evident among affluent retirees (earning more than $250,000 a year) who also had not saved enough to generate the income they said they needed to meet their financial expectations during retirement. 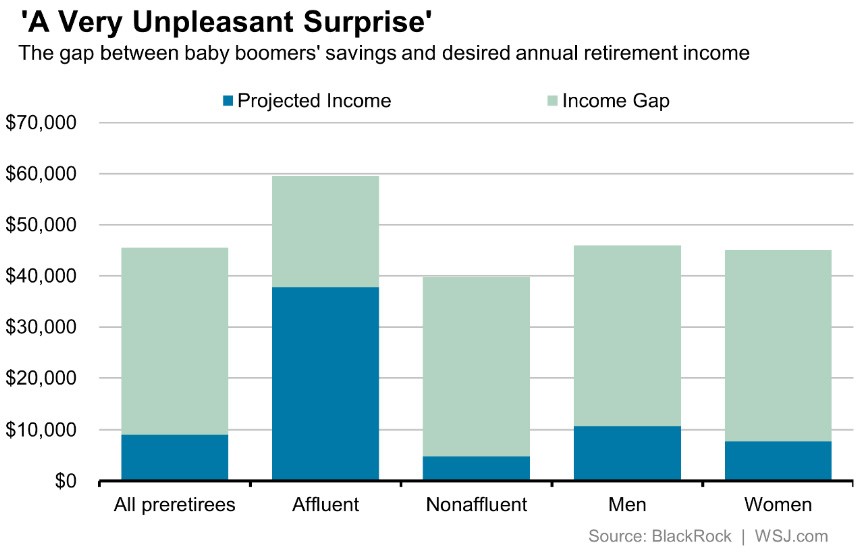 About that cash mentioned above: the very low interest rates don’t generate a lot of income, setting the stage for nasty surprises in later years (as the chart indicates is likely to happen).

The gap could widen for younger workers

The study also pointed out that millennials ages 25-34 were especially concerned about investing. Nearly half of this group in the Black Rock study agreed that “what you might earn investing isn’t worth the risk of losing your money,” the most of any other generation. This group had 70% of their portfolios in cash or cash-like investments.

While younger workers have plenty of employment years ahead of them, they might end up living even longer than senior citizens do today, and therefore spend a longer time in retirement—time that will require much more in savings.

Close the gap through self-direction

Whether you’re a millennial, a Gen-Xer or a baby boomer, it’s time to close the retirement gap between what you’ll need and what your retirement plan is prepared to pay you. A great way to do this for savvy investors is to open a self-directed retirement plan.

As we say at Next Generation Trust Services, if you are already investing in alternative assets outside of your existing IRA, why not use what you know and build up your savings through self-direction? Your experience with certain types of assets (such as real estate, precious metals, various commodities, unsecured loans and so much more) can help you bridge the retirement savings gap and meet your retirement income expectations.

Learn more about the types of investments you can include in a self-directed retirement plan, and go to our Starter Kits to get the ball rolling.

If you have any questions about self-direction as a retirement wealth building strategy, our knowledgeable professionals can address them and help get you on your way towards closing that retirement gap.