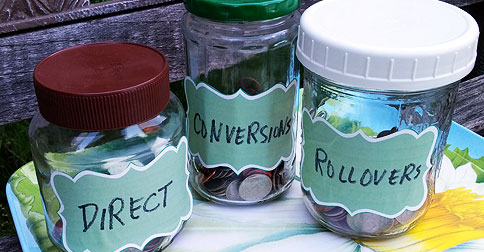 Fair Market Values – What Types of Contributions do You Make to Your Self-Directed IRA?

In our previous post about FMVs we talked about how the values of IRAs have risen since the Great Recession. Today we’ll look at how IRA values break out by account holders’ income levels as well as the types of contributions they are making.

FMVs based on all types of contributions

The data from Statistics of Income, the largest federal statistical organization, show that in 2012, when these figures were reported, approximately 5.5 million taxpayers funded their Roth IRAs as opposed to 3.7 million to Traditional accounts. SEP and SIMPLE IRA plans had much lower numbers of contributors that year (about 2.6 million combined). These figures were compiled across all types of contributions: direct contribution, conversions (of one plan type to another) or by rollovers from other account. In 2012, it appears that rollover contributions were very popular.

Let’s parse the numbers a bit:

This was reflected in the dollar amounts – approximately $301 billion rolled over into Traditional IRAs in 2012 against a relatively small $4.4 million into Roth IRAs that year.

It is possible that when the IRS regulations about rollover and adjusted gross income limits changed in 2012, this had an effect on contribution activity. An individual’s earnings dictate how much he/she may contribute annually so as always, Next Generation Trust Services advises our clients to consult their tax professional about which type of IRA makes the most sense for them in the long run.

The SOI data shows that older taxpayers, ages 50 to 70, made the highest dollar amount of direct contributions to their retirement plans in 2012; taxpayers between the ages of 30 and 49 contributed much less than their older co-workers. These are for Traditional and Roth IRAs.
Taxpayers in the combined group of ages 30-49 added about $11.7 billion to their IRAs in 2012.

Compare this figure to that of the 50-70 age group, which contributed roughly $18.1 billion to both types of retirement accounts. This is not really that surprising, given that so many Americans lag behind in their retirement savings and may wake up and start catching up as their retirement age approaches.

When split into those in their 30s and their 40s, the Traditional IRAs saw much more in terms of direct contributions by the older group but the Roth contributors were effectively even.

The taxpayers ages 30-39 funded their Traditional IRAs with $1.5 billion in direct contributions; those in the 40-49 age group contributed nearly $2.6 billion to theirs—so their savings activity ramped up in Traditional IRAs.

However, the figures are nearly the same in 2012 when it came to funding Roth IRAs for both age groups: $3.3 billion for the younger set and nearly $3.4 billion for the older group.

It’s no surprise that the higher a taxpayer’s adjusted gross income, the higher the fair market values of their retirement plans. What is interesting from the SOI report is that regardless of income level, Traditional IRAs were the clear winners in terms of year-end fair market value. In some brackets, that figure is as high as 10 times, meaning that the fair market values of the Traditional IRAs were 10 times (or more!) higher than those of Roth IRAs for that income group. The biggest discrepancies start showing up in the $100,000 adjusted gross income level.

For those of you who love statistical tables and want to read more about the SOI report, go to the IRS website page that has all the details.

How are you doing with your IRA contributions?

It’s a good idea at any age and income level to start saving for retirement (or making those catch-up contributions). With a self-directed IRA you can not only bolster your retirement savings through your direct or rollover contributions (our professionals will explain how), you can also include many alternative assets that can help you grow a more lucrative portfolio. For savvy investors who know and understand these nontraditional investments—real estate, precious metals, commodities, private placements, hedge funds and much more—you can build a diverse, tax-advantaged portfolio. Self-directed retirement accounts can be Traditional or Roth IRAs, SEP and SIMPLE IRAs—you can even self-direct a health savings account.

Contact Next Generation Trust Services to discuss the many options and benefits of this retirement wealth-building strategy and build up your account’s fair market value with a self-directed retirement plan.

For More Information About Self Directed IRAs, CLICK HERE